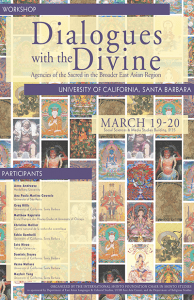 Dialogues with the Divine:
Agencies of the Sacred in the Broader East Asian Region

The diffusion of Buddhism in various parts of Asia and the ensuing processes of acculturation resulted in wide-ranging cultural and religious transformations. In particular, local discourses on the sacred dimensions of reality were deeply affected by Buddhist teachings, and at the same time, local forms of Buddhism emerged in which previous Indic elements came to be questioned, relativized, and resignified.

A theme that is especially relevant in the Buddhist acculturation in East Asia is that of divine beings and their agencies. Since a very early stage Buddhism incorporated the rich Indian tapestry of sacred and more or less invisible beings: Vedic and Brahmanical gods (deva), local deities (devatā), various spirits, demons, ogres, and so forth (among them, we find gandharva, preta, naga, yaksha, raksasa, and pisaca, in addition to various sacred animals such as garuda and mahoraga). Outside of he Indic world, In China, Japan, Tibet, Mongolia, and elsewhere, the Buddhist teachings encountered different divine beings; some of these beings were already articulated in complex doctrinal and ritual systems. Confucianism and Daoism already had sophisticated discourses on deities; but even in places where local doctrines had not been written about and systematized, such as early Tibet, Japan, and Mongolia, deities were the objects of multiple representations and ritual interactions. Buddhist authors adopted various attitudes toward these phenomena: they ignored them, studied them, subjugated them, converted them, made them into protectors of Buddhism, and in some cases they even argued that such local deities were in fact bodhisattvas or regional avatars of buddhas and bodhisattvas. In fact, dealing with local representations of the sacred, with local deities and their agencies, was an important aspect of Buddhist acculturation that had broader consequences. The Buddhists reclassified the forms of the sacred and incorporated them into their own worldview. At the same time, other religious specialists from different, local traditions (Daoist priests, Confucian scholars, Bonpo practitioners, Shinto ritualists, etc.) confronted themselves with the challenges and insights provided by the Buddhists and sometime revised their own representations of the sacred in light of Buddhist interventions; at times, however, they decided to ignore Buddhism and propose alternative pantheons. Furthermore, hybrid deities, no longer Buddhist but not yet the subjects of independent religions, also developed.

Despite the importance of these discourses and representations of the sacred, modern scholarship (in this case, allied with many modern Buddhist organizations) has tended to ignore or downplay the role of deities, both in Buddhism an in East Asia. Traditional western academic suspicions against “idolatry” and “paganism” combined with modern agnosticism; these intersected with East Asian local skeptical attitudes and modernizing tendencies (also within Buddhist traditions). As a result, deities are normally considered as, variously, remnants of premodern superstitions, skilful means to bring ignorant folks into the Buddhist fold, political tools to keep the masses quiet, or simply aspects of a vaguely conceived and described “popular” religion. A clear indication of the limitations of research in the field is the woefully inadequate terminology that is currently available, in which expressions such as “gods,” “demons,” “spirits,” and “ghosts” do not really render the complexity and nuances of the East Asian phenomena they aim to address.

This two-day workshop gathers international experts to discuss various understandings of “gods” (Chinese shen; Jpn. shin or kami; Tibetan lha) in the broader East Asian region (which includes China, Japan, Tibet, and Mongolia). Papers focus on the notions of “gods” as they are envisioned, represented, and addressed in the traditions that generally fall under the rubric of “Buddhism,” “Daoism,” and “Shinto” in history.

Some of the principal avenues of inquiry that this workshop aims to address are:
discursive categories, typologies, and/or representations of “gods”; specific strategies of interaction according to different classes of divine beings; religious specialists in charge of interaction with the deities; cartographies of the divine landscape (inner, outer, or transmundane); ontological understandings of “gods” and their subcategories (including, for instance, distinctions between “gods” and “buddhas”); social and political ramifications of divine agencies and their relative discourses.
Although the range of approaches and topics addressed in this workshop will be relatively broad and diverse as based on specific case studies, all contributions will strive to examine more general patterns in the relationships between practitioners and the divine in both their ritual and conceptual components.

Organized by the International Shinto Foundation Chair in Shinto Studies; co-sponsored by Department of East Asian Languages and Cultural Studies, UCSB East Asia Center, and the Department of Religious Studies.